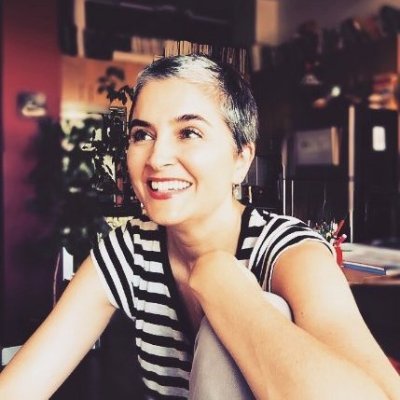 What do you want our readers to know about you?

That you are never too old to try something new and get recognition for it.

What would you like to see more of in the workplace?

Flexibility for my friends who are parents and not freelancers and diversity/inclusion put into practice.

What characteristics and/or qualities do you admire in the women you work with?

Their ability to work and parent through whatever life throws at them.

What advice did you wish you were given earlier in your career?

Negotiate for higher pay. I wish I had had the courage to ask sooner.

How do you think COVID-19 will change the future of work for women?

It’s taking women out of the workforce. This is a pivotal moment for governments at all levels to offer programming and financial support for schools and daycare so that women can regain their role as breadwinners.

We also need to normalize flex time for men who are parents. Women won’t be equal outside the home until men are equal inside it.

How do you think we can increase diversity in the workplace?

By changing the makeup of hiring teams and boards. Diversity has to start at the top.

What is one example of a positive, memorable experience you’ve had in your career?

I don’t like waiting to be picked. I would rather show people what I can do and encourage them to get in touch with me. Social Media Marketing has made that possible. It is still the best thing that has ever happened to my career because it has allowed me to showcase all of my talents (versus picking just one) and I can control the distribution.

People who care about earning a nod from legacy media still look down on “self-publishing,” but to me the creative freedom and control it gives you is key. Like the time the TED Conference hired me to be a graphic facilitator at one of their conferences because they saw one of my drawings on LinkedIn.

What was one belief you had that you later realized was a myth?

I realized and am realizing that myths, especially around ageism, will persist as long as we live in a consumer culture. So, like a petulant teenager, I decided to defy them and continue to show what I’m made of. That is not exactly the question you asked, but I came into the workforce in the early 1990s knowing I would have to push back against sexist and later ageist tropes, and I refuse to fall for them. It’s one of the reasons I don’t colour my silver streaks. I don’t like being told I should obsess over my changing appearance.

Why are you fabulous?

Because I am 6’1″ and I still wear heels (occasionally).

Do you have a mantra or quote that inspires you? If so, please share it below.

Given the state of the world, the mantra, “bad things happen when good people do nothing” is like a daily prayer right now. How can I make a difference? I am making a point to push back against racism in my capacity as a university instructor, giving extra time, encouragement and support through job recommendations to students in the LGBTQ and BIPOC communities.

Where can people find you online?